A butterfly I was,

flying in my own rhythm with nature;

blowing away me from my harmony

bringing in chaos to my thoughts..

you stirred away the colours of my wings;

all I could do, was stand still, as you reigned over me..

you left me, with the anarchy for a lifetime.. 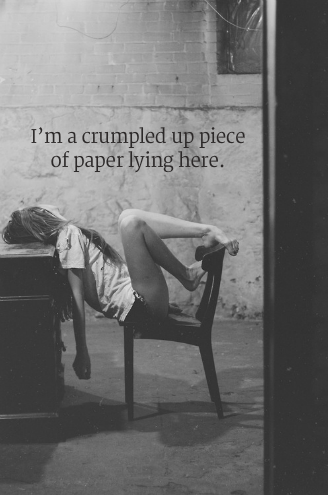 The look in your eyes

scares me at times

remind me the world is never the same

as I assumed it to be

everything went astray with me

when I matched those eyes

the wolf eyes, that stole everything from me

fragmenting the peace in my dreams

turning me into the devil I was scared to be

running away was impossible

as the thoughts haunted me

now and then all along

the clutches too strong to just untag

scars may mend away

though the depth never seal

a pain I endure all along.

S​he knew that the negativity pulled her
she could find the diamond in the charcoal
she was the one, who was sharp enough to find the goodness
her eyes were choosy
she skimmed through the crowd before she chose the one
she was spotted by many, yet she knew how to be in the crowd
she contemplated less but focused more on the goodness
she never went for appearances, but for the warmth the soul gave
she was like a magnet to the true souls
she knew how to console the right ones
who needed her them most
she tendered them, cared for them
in the end, she knew she would be hurt
yet her love knew no bounds
she loved the chosen one more
even if she gets hurt the most
she was never focused​ on the outcome​
she looked for the happiness she offered them
even if the path were laid with thorns
she would walk on it and keep the chosen one happier
in the end, they leave her marooned
Yet she loved, even if it tormented her …

She decided to remain silent, quite impossible for her, though.

She felt like the moment she seems to decided silence, there was a battle going on in her mind, trying to convince that silence was never an answer. At times the words need to be out and left to be heard by others, else the conflicting words in the heart will remain there in total chaos. Silence kills her thoughts which are the catalysts of her emotions. The thought makes what she is now – convinced, confirmed and dedicated.

She silenced her decisions once she was determined to achieve.

She silenced her dreams, as it cannot be achieved.

She silenced her heart, as it was broken many times.

At times the silence killed her soul, she was never what she wanted to be.

Overshadowed by the decisions of, fiddling in responsibilities, flying like new born bird who is trying to reach a branch while its initial flight.

Yet she found the freedom of speech, a way to propagate her thoughts to reach the thousands who felt like her. Even though her lips never spoke, her voice was never head, her fingers moved and her words flew out into the blank pages.

She found the way to say and not to say. She was never silenced in her thoughts. Her thoughts were free and all she did was enjoyed the new found freedom of expression. To express or not to express was a choice, and to read and not to be read was another choice which she fought on her own.

Yea sometimes am totally confused as all other parents .

I get confused about love , care ,anger , games , and many more when am with my kids, and then suddenly everything goes well, when am looking at my daughters cute faces and start doing whatever they want me to play with them.

When am cuddling my younger one, i feel am not giving enough attention to my elder lil gal…she is also too lil to be cuddled, then i lay the younger one and take my lovely angel, but doing so ….again I get hurt..am not sure if every other parent feels the same but may be yes. Sometimes I am soo careless i feel ,confused about loving my daughters. I don’t want to give either one less only more and more as much as i could.

Its true in every parents case, don’t know what to do in such cases . One of my friends as well as my mom advised me that , to a certain extent we need to pay more attention to our elder ones , because they are more aware of your less awareness and less attention .Gradually they will understand what is going on around them and will play along with us and we will be quite surprised to see how they will  adjust and tag along with us in our activities taking care of the younger one.

It really takes lots of patience and love and only love !!!!